Tuesday - February 7, 2023
On Omaha
Your One Stop Site For Everything Omaha, Nebraska

Coffee & Kareem is streaming on Netflix. 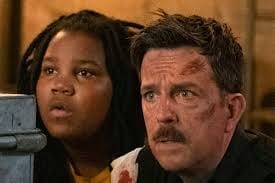 We can’t help what we find funny. Who knows where it comes from in the first place? We all have those particular peccadillos that crack us up and make little to no sense. That’s just it—our sense of humor is simply that, a sense. There’s no logic, no rhyme or reason to explain it.

Years ago, I worked with a guy and got a very close look at his sense of humor. He was responsible, well-liked, and good at his job. Yet no matter what he was doing, if he saw someone fall, he would immediately die of laughter. You’d hear this loud, almost Joker-style cackling, and you’d say to yourself, “Yep, someone just went down.”

Was he a bad guy? No. Did he have an unsophisticated comedic palate? Considering that I crack up when Will Ferrell starts screaming, I’d also say no. If you find a thing funny, that’s great. But if you’re making a comedy, you’re going to want to expand your horizons beyond a single joke. That’s what drove me nuts about the new comedy Coffee & Kareem; there’s genuinely funny stuff on the margins that kept getting pushed back by a tired central premise.

It’s hard being a cop. It’s really hard being a cop in Detroit. If you’re James Coffee (Ed Helms), a cop in Detroit who’s a) white and b) not good at his job, the mountain becomes damn near impossible to climb. Understand that Coffee isn’t a bad cop because he’s enthusiastically corrupt and/or vicious. He’s just a little bit of a dipshit, and his dipshittery knows no bounds. 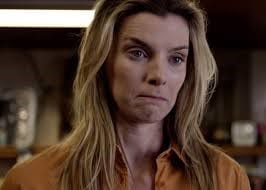 An example? He tells people he can’t possibly be a racist since he’s got a black girlfriend, and his aforementioned girlfriend Vanessa (Taraji P. Henson) really wishes he’d stop saying that. Despite it all, Coffee is a good guy trying to be a good cop and a decent partner. He just needs someone to cut him some slack.

Unfortunately, Vanessa’s 12-year-old son Kareem (Terrence Little Gardenhigh) is determined to not do that. Like the vast majority of tweens, he’s a cross between an adorable imp and a foul-mouthed sociopath. His plan, if you can call it that, is simple. He’ll give a sock full of money (yes, a sock) to Orlando (RonReaco Lee), a feared fugitive. Orlando will cripple Coffee. Vanessa will break up with Coffee, and Kareem will be happy. To quote Tony Stark, not a great plan.

As you likely expected, Kareem’s plan doesn’t quite work out. He witnesses a murder and is thrown together with Coffee, which sucks for both of them. Things suck even worse when they accidentally expose a ring of corrupt cops led by the entertainingly insane Watts (Betty Gilpin), and Coffee is framed for the killing. Now, they must dodge the bad guys, clear their names, and learn to stop loathing each other.

Time for a gut check, everyone. Do you find the notion of a swearing kid funny? Like, really, really funny? Coffee and Kareem certainly hopes so, since the main comedic concept is a ballbusting kid dropping f-bombs in every scene he appears in. This movie was intensely frustrating since every time something worked well, another thing undercut it. 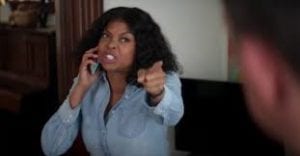 Is the problem that Michael Dowse is a bad director? Nope. He’s been in the business a couple of decades now, and he made the excellent hockey comedy Goon. Here, everything feels off. Great comedy filmmaking lives or dies by timing, and you can see that in strong movies like Game Night, where directors John Francis Daley and Jonathan Goldstein know how to time shots, edits, and even special effects to deliver massive laughs. With Dowse, that consistently doesn’t happen. For example, there’s a moment in the third act where Coffee and Kareem* are trapped in a warehouse. Vanessa is outside panicking about their safety, and a firefighter tells her everything will be fine. The warehouse explodes, and the firefighter follows up with, “I know a guy who’s a great grief counselor.” A couple of cleverly timed edits and this moment should be hilarious. Yet Dowse’s pacing is off, and the edit comes too late, robbing the joke of its energy. That happens continuously with both comedy and action scenes, creating an action-comedy that’s not as funny or exciting as it needs to be.

Despite Kareem being a kid, Coffee & Kareem is really a buddy cop movie. Screenwriter Shane Mack clearly loves classics like 48 Hrs and Lethal Weapon. There are a couple of fatal problems with his script, and the first is the overreliance on gags about Kareem either being profane or him accusing Coffee of being a child molester. A couple of times? Sure, fine. Over and over and OVER? It becomes a great example of anti-comedy. The other issue is a misplaced focus in Mack’s script. He’s clearly a funny guy, and there are bits with his antagonist Watts and her henchmen that just kill. His side characters are consistently funny, yet they keep getting pushed to the margins while we’re forced to spend time with the unfunny main characters. 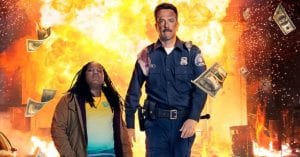 An inconsistent script means the cast has less to dig into. I like Ed Helms and his put-upon nebbish schtick, but just once I’d like to see him playing someone with a degree of competence. As Coffee, he’s so incompetent that I kept thinking, “Why don’t they just fire this guy?” He’s got decent chemistry with Terrence Little Gardenhigh. The kid is a pretty good performer, and I wish he had something meatier to bounce off of. The bright spots are Betty Gilpin and Taraji P. Henson. Gilpin’s Watts is a lunatic, and her crazypants performance immediately cranks up the laughs and the energy. I’m not wild about seeing an actor as talented as Taraji P. Henson stuck playing the mom, yet she’s got a fun fight sequence where she gets a chance to cut loose.

Since we’re all self-quarantining and desperate for entertainment, I don’t doubt that people will turn to Coffee and Kareem for some easy laughs. You’ll find them here, and you’ll also see the shadow of the weirder, more creative, and funnier comedy that could have been.

*The pun in that title makes me want to fine them.

Tim Brennan
Tim has been alarmingly enthusiastic about movies ever since childhood. He grew up in Boulder and, foolishly, left Colorado to study Communications in Washington State. Making matters worse, he moved to Connecticut after meeting his too-good-for-him wife. Drawn by the Rockies and a mild climate, he triumphantly returned and settled down back in Boulder County. He's written numerous screenplays, loves hiking, and embarrassed himself in front of Samuel L. Jackson. True story.
Tagged: Coffee & KareemMovie ReviewNetflixTim Brennan
OnOmaha.com is a directory and information guide for Omaha, Nebraska.
Discover the best of Omaha shopping, restaurants, night life, breweries, events, business, outdoors, fun, local life, real estate, transportation, jobs, and schools.
Looking for what to do in Omaha? OnOmaha.com has columnists, and bloggers to keep you up to date on the best of Omaha, Nebraska.